Every now and again you acquire a property that makes you feel a little different. Of course, as book lovers we say we love all our babies, but come on: Sometimes it’s just work. Running the numbers, bidding, buying. Rinse and repeat.

Mickey Rowe is an actor, a theatre director, a father, and a husband. He is also a man with autism. You think those things don’t go together? You don’t know Mickey Rowe.

When Mickey’s agent approached me about acquiring the audio rights to his spring 2022 memoir, there was only one non-negotiable: Mickey had to narrate. She asked if I would like to get on a Zoom call with the author to discuss, and of course I welcomed the opportunity. You see, my wife is an elementary SPED teacher. My dinners are filled with stories of these unpredictable, wonderful humans. I thought I knew everything there was to know about people living with autism. I didn’t know Mickey Rowe.

In the span of a half-hour Zoom call, Mickey shattered all my assumptions and defied all my expectations. He was engaging, empathetic, funny, passionate. His backstory should have given me a clue: Mickey has directed at Tony Award–winning theatres and appeared as the title role in the Tony Award–winning play Amadeus. Mickey was the first autistic actor to play Christopher Boone, the lead role in the Tony Award–winning play The Curious Incident of the Dog in the Night-Time, which also made him the first autistic actor to ever play any autistic character in a professional performance setting.

And that’s when Mickey dropped the mic on me…

“You know how I prepared for the role of Christopher Boone, Brian?” Mickey asked me.

Mickey smiled into his camera phone, halfway across the country. “By listening to the Recorded Books recording of THE CURIOUS INCIDENT OF THE DOG IN THE NIGHT-TIME.”

It turned out that the question was never, “Should Mickey Rowe narrate his memoir?” It was always, “What kind of idiot would not cast him as narrator?”

Growing up, Mickey Rowe was told that he couldn’t enter the mainstream world. He was iced out by classmates and colleagues, infantilized by well-meaning theatre directors, barred from even earning a minimum wage. Why? Because he is autistic.

Fearlessly Different: An Autistic Actor’s Journey to Broadway’s Biggest Stage is Mickey Rowe’s story of growing up autistic and pushing beyond the restrictions of a special education classroom to shine on the stage. As an autistic and legally blind person, living in a society designed by and for non-disabled people, it was always made clear to Mickey the many things he was apparently incapable of doing. But Mickey did them all anyway—and he succeeded because of, not in spite of, his autism. He became the first autistic actor to play the lead role in the play The Curious Incident of the Dog in the Night-Time, landed the title role in the play Amadeus, co-created the theatre/philanthropy company Arts on the Waterfront, and founded the National Disability Theatre. Mickey faced untold obstacles along the way, but his story ends in triumph.

Many people feel they are locked out of the world of autism—that it’s impossible to even begin to understand. In Fearlessly Different, Mickey guides readers to that world while also helping those with autism to feel seen and understood. And he shows all people—autistic and non-autistic alike—that the things that make us different are often our biggest strengths.

“Mickey is the definition of a ‘trailblazer,’ and blazes with such grace and effervescence; through the highs of success and rollercoaster of life he remains grounded and relatable. This book is personal, charming, important, and touching. No matter one’s lived experience, it is incredibly pertinent.” —Keely Cat-Wells, award-winning disability rights activist, Forbes 30 under 30 honoree, Princes Diana Award winner, and Lady Gaga’s Born This Way Foundation advisory board member

“Mickey Rowe’s Fearlessly Different is fascinating, educating, elucidating, and sometimes enraging. It is inspirational and eye-opening. It is insightful and, hopefully, inciting—a call for action, for necessary and overdue change, for a vital, urgent reframing and rethinking of disability. But mostly, Fearlessly Different is a very good story—several of them, in fact—of resilience and courage and the strength and power of being two things: different and who you are.” —Laurie Frankel, New York Times best-selling, award-winning author and Reese Witherspoon Book Club pick

“Mickey overcomes so much to set such an amazing example of what is possible for all of us who struggle to overcome barriers and obstacles. His story will have a powerful impact on all of us in raising our belief and confidence to go after our dreams. Thank you, Mickey.” —Chris Nikic, first Ironman Triathlete with Down Syndrome 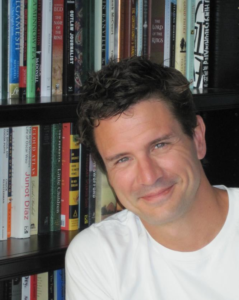 Brian Sweany is Director of Acquisitions for Recorded Books, where he has worked since 1999. Brian has acquired the audio rights to various bestselling authors, including Mark Haddon, Pierce Brown, Diana Gabaldon, and Dolly Parton. His debut novel, Buy the Ticket, Take the Ride, was published by Rare Bird Books in 2016.